Surfing contests are often defined by the quality of waves. But not the Bondi Single Fin Classic. The waves can be as wonky as funk music but no one really cares, as this is a surfing circus. Tents, buses, fancy dress, surprising people, and impromptu dancing all feature – which is why I’ll focus on those virtuous elements in this recap. 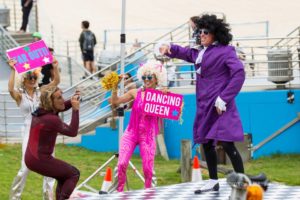 The day started under infrequent but heavy downpours. In fact water was coming up at us from below at one stage when a star picket was driven into a water main on the South Bondi hill. Fortunately, we’re such a vital part of the community and driver of youth development that we can make errors with council every now and then…. and the show went on.

The first rounds were held in small, but consistent waves with the goofy footers at an advantage as a left-hander developed in the corner. Old Single Fins are hard to ride at the best of times, but in these waves they are confounding. But that’s what this day is about – boards lie around on the hill and you pick one up, see how it feels under arm, see how the last surfer went on it, then give it a go. In your next heat you might want to try something else or find someone else has the board you want.

Eugene of Aquabumps not only made it out of the first round for the first time, but won his heat convincingly. Dave Davidson was guest of honour this year – a title which results in his photo ending up on the t-shirts, posters and artwork, plus a number of other benefits over the weekend. Davo, a former pro-surfer, who now lives on the Gold Coast, smashed out an 8 and a 7 in his heat, marking him as a key threat. Reigning champ John Ozzie wasn’t finding previous form, stuck in the south corner rip, he bombed out early. His arch rival Ian Wallace was milking the waves on a carefully chosen McCoy which was tucked away in a car between surfs so it couldn’t get waterlogged by other surfers riding it. These are the very tactics required to progress.

As the day went on surfers across the 3 divisions belted out all sorts of highly creative surfing in the unpredictable waves – which picked up in size during the early afternoon. Creativity was also required on the dancefloor. As tradition dictates, surfers dance before they surf, for vital points. The girls from Fluoro Friday judged the dancing – dressed in iridescent disco wear – Luke Kennedy’s girlfriend Aprilla, her twin sister and their friends were in fact the most energetic dancers on the day, jiving away as they handed out scores to surfers whose moves ranged from impressive to downright disconcerting. Punters walking past were unsure if the dancing was the results of a bet gone wrong, or if it was genuinely volitional and just very twisted.

No one could complain about the music – Charlie Cowan spun up a storm on the turntables and by mid-afternoon had the hill jumping, despite the cloudy weather. Mt Warning provided the live music, and killed it from atop the bus rooftop. The bus was courtesy of Justin Crawford, whose hat company Fallen Broken Street was the main sponsor. The Fallen Broken Street crew drove down from Byron overnight, care of BBR club patron Tony Spanos. The FBS crew have been travelling the country on their Glitch In Time Tour playing music, surfing, and selling hats. We became the last stop on their journey and they tuned into the Single Fin contest perfectly.

The other sound to mention on the day is Cooper and Bush from Radio Hub. This Bondi duo have been commentating the Single Fin since day 1, and are as much a part of the entertainment as the surfing. In fact this is what grass roots surfing contests are all about. One beach, bringing in the best people from the neighbourhood to make a festive event. Only surfing can really do this well – imagine a tennis club saying hey we’re going to get some DJs, and have a fancy dress tennis match using 1960s racquets? Likewise rugby league or Volleyball. The commentary of Cooper and Bush make for a unique event, and find ever more weird and wonderful ways of interpreting surfing and making people laugh.

By late afternoon the finals had distilled the best 4 surfers from each division into 20 minutes of do or die surfing. The stakes were high with 3 brand new single fin surfboards up for grabs – care of local surf shops Surf Culture and Sunburnt Mess. The opens featured Grayson Hinrichs, just 15 years of age and already a part of Bondi surfing folklore (evidence here: http://www.dailytelegraph.com.au/newslocal/wentworth-courier/bondi-teen-spears-16kg-kingfish-and-then-walks-it-home-tied-to-his-skateboard/news-story/a0be87669a6ea9d29b29e7d51ad79491). Grayson showed incredible surfing intuition on a big old board in ordinary waves, but failed to surpass Chris Friend who was a stand out all day.  In the masters Ryan Carr from Bronte was unlucky to be pipped by Bondi Boardrider’s President Ian Wallace, a fearsome competitor and great bloke who has a few SF titles under his belt now. The Grand Masters came down to close finish with Phil Leadley overcoming Rick Scott, West Coleman, and Billy Morris. If you’re on Facebook Deadly will have told you all about this by now.

A big thanks to Vissla for supplying the contest t-shirts. The proceeds go a long way in funding the event and supporting the club. They looked great and we hope to keep working with Vissla in future.Thanks to Richie Stenlake of Made Agency for all the great artwork! Also thanks to Vic Austin our Contest Director who is an absolute gem! Also thanks go to Spanos, Ricky Scott, Dave Byron and Stodsy, and especially to our guest of honour, Davo, a true Bondi champion.

The next Bondi Single Fin Classic is in 2 years. Barely enough time for me and my co-organiser, Beau Sevastos, to recover.