Comp 2 certainly turned on the conditions (if not for a little rain) with the wind puffing perfectly offshore and the waves hitting our new “Trestles” like bank with ruler edged precision. Due to these conditions our fearless president and new first time grandfather had put out an early Ray Hug alert and no one was safe. The first division to indulge in these salubrious conditions were the micro groms and with a perfect couple of A frames to choose from these micro men took apart the waves. Young power surfers Zohar Messika and Angus Jones were on a mission to displace as much water as they could. In the end the victory went to Young Zohar who has taken the prize money and treated himself to a 4 month holiday. Second place went to a very inform Angus Jones. Notable mention must also go to young Chloe Lewis who surfed brilliantly against the boys progressing in her first ever Boardriders heat. A big thank you must go to all the parents that come down and help. It’s great to see the support you not only give the kids but also the club.

The cadets were next to hit the water and they put on quiet the show. With the swell showing slight signs of an increase these guys went at it. Kelly Gamblin asserted his 2015 campaign by taking out his second victory out of as many contests just edging out Grayson Hendricks. This is a spectacular result from Grayson who decided to elevate out of the micros to take on the big boys in the cadets. In third place saw Isaac Cremer who pushed the other finalists to their limits and rounding out the final in fourth was lasts months runner up Oscar Ayto.

The juniors saw another surfer with a perfect start to the year with Pete Kavinaugh taking out his second event. Pete surfed on point all day and adapted to the condition perfectly to take the win. In second place was Sam Annear. Sam gets better every week and with a sparring partner like Sage Gubbay it’s no wonder. Ethan Davies was an early standout scoring a back hand barrel that scored 10’s across the board.

The Cocoon Division (also known as the grand Masters) and might I add my favorite division, was next to surf the fun conditions. As most other divisions check out their rivals new boards or wetsuits, this divisions scopes out their rivals new hips and knees. It’s a meeting place to discuss the latest in stem cell therapies and wild new Arthritis cures. It’s also a division who’s by product ensures all local Orthopedic surgeons children will be attending the very best private schools throughout the Eastern Suburbs. But much like the movie Cocoon as soon as these legends hit the water they instantly transform into man grommets and surf as hard as they did some 30 years ago. Bill Morris was once again the man to beat and in the early rounds found plenty of tube time. JJ Botella was surfing like the Sade song “smooth operator “ but could only muster a 3rd . The final came down to a duel between the infamous Night Club Tsar of the late 80’s Tim “studio 54” Ellis and legendary lens man Billy Morris. In the end it was Billy that got the nod but was pushed by Tim every step of the way. Alex Bosansby was as stylish as ever coming in 4th.

This year has seen a strong surge in form from the younger girls with the ever smiling Georgia Henderson coming in second and the now familiar name of Lara Damelian taking out first place. Sally Charles, the best needle poker (acupuncturist) in the business came in a very credible 3rd place with our famous Frankie Lewis taking out 4th. Frankie was still adjusting to the colder climate after a recent trip charging Indonesia’s famous left hand points. Frankie has let it be known she is out to take down all in the next contest for a long overdue victory. Lian Ellison also surfed brilliantly to come in fifth.

The Masters was lucky enough to sample some of the best conditions of the day in the early rounds with Rod Donoso showing early form. Rod had only brought down 10 boards of his 100 board quiver and obviously had chosen the correct craft putting up some huge turns. There were some early round shock eliminations leaving the door open for season debutant and wave forecaster/ whisperer Ben McCartney to take control in the final just edging out Rocket Rod Donoso. Karl page, who once again completely shaved down for the event surfed strongly throughout the day to close out the division.

With all other divisions wrapped up it was the opens time to shine and shine they did. Much like the masters there were some shock eliminations. Chris friend was no better example, with remnants of his morning face peel still noticeable Chris was looking fresh in the early rounds. Chris was also coming off the back of taking out the first contest the odds were in is favour but showing that contests are always unpredictable, was a shock elimination and failed to make the finals. Bondi famous aeronautics expert Pama Davies decided to ease back on his air game and let his turns do the talking taking him all the way to the finals. Luke Musset was also displacing large amounts of the ocean with his man turns and found himself going toe to toe with Pama some 20 years his junior. Also in the mix was WQS ripper Teale Vaner and Bondi favorite son Chris Jones. Jonesy was surfing well all day as was Teale but it was the odd couple of Pama and Musset that took first and second respectively with all finalists putting on a great show.

Lastly how good is the “Bondi domination” of late. This phrase has not been associated with a group surfers from Bondi for quiet some decades but after the recent results at the Southside eliminations our beach is once again a power house in Australian surfing. Grayson Hendricks came first in his division as Lara Damelian did in the girls, with the Big Man Child Sage Gubbay taking out 3rd place in the under 16’s. Congratulations on behalf of the committee and the club, we wish you all the best in the state titles. Bondi Boardriders also recently came 3rd in the country in the Australian Surftag series and 8th in the country in the Australian Boardriders Battle. Teale and Chris (both WQS surfers) are currently running surf training squads so if you’re looking to make a few more heats jump onto www.bondisurf.pro these boys have a wealth of expertise. 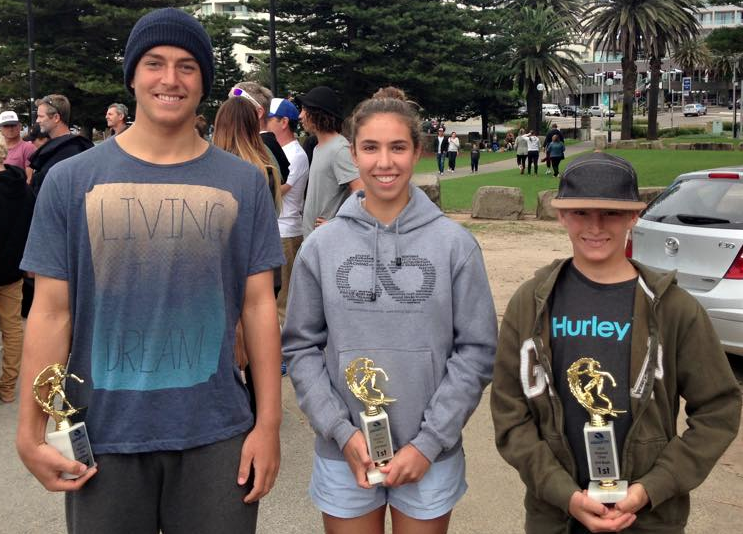